The Betrayal by Kate Furnivall, a historical fiction book based just before the Second World War with a female lead, has so many twists and turns that you can’t help but be on the edge of your seat as you turn from one page to the next.

Having a story that revolves around a female lead isn’t that unusual in the fiction world but it is always refreshing to encounter a female lead that is a strong character with a complex background and thoughts throughout the entire book rather than just becoming another emotional stereotypical woman with nothing more than romance on her mind. There isn’t even just one strong woman in the shape of Romaine, a pilot attempting to help protect Spain from the fascist regime strangling it, but two with her twin sister Florence trying to carefully balance a life that provides her safety whilst also seeking to protect her sister and figure out what was the best for those around her and her beloved France. 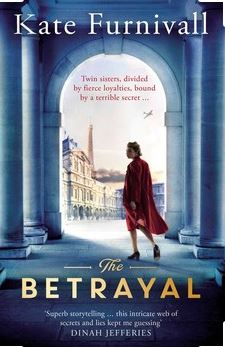 Whilst the twins seemed to have such polar opposite views on the political state of the world changing around them they were tied by a common factor of having to create a story about how their father met his grizzly end in the study; one desperate to believe that they could not possibly be a killer and the other desperate to keep the truth hidden. With such a dark secret in the past one went about life with a weight of guilt, trying to fix the wrongs that her sister made her believe she had committed and accept the cover up that seen a man executed for it, and the other prayed the other would never start to remember or question what actually happened that day.

As the Second World War quickly approaches it is impossible for Romaine to not focus on the past, the increasing number of secretive French and German diplomats around her and the turmoil that was occurring in her underground group trying to aid the Spanish from falling into the hands of fascism. It was increasingly obvious to Romaine that Florence’s husband was aware of her secret missions, did not approve of them and wanted to do as much as possible to keep Romaine out of the family life but the further into the plot the reader falls the more apparent it becomes that there are deeper reasons to this than him simply being a French diplomat trying to steer clear of a war with the Germans.

A bit of romance creeps into the daily life of Romaine but just like everything else in her life it is far from simple and puts her further into harms way as it directly connects her with a known private runway owner who is being traced for suspicious flying activity back and forth to the south of France. And this could romance could have caused them both to have their life cut short, on a train back towards Paris, if it wasn’t for a fluke of meeting a famous eccentric American lady along the way.

The story is incredibly well written and captivates the reader throughout. It is not so much a happy ending, in the sense of what you want to happen, but it is an ending that still brings a smile to the face and is one that certainly fits the plot and does not cause any disappointment. This is certainly a well-researched and carefully choreographed book that I would happily recommend to people that like political historical fiction and, as my first encounter of Kate Furnivall, it has made me want to pick up more of the authors books to dive into as well.

Want to see what I’m currently reading? Give me a follow on Goodreads.