Making coleslaw and beetroot salad yourself is fairly easy but sometimes there just is not enough time in a day or you know you are going to be short on energy. When I grabbed both of these in Lidl it was because I wanted to have them that evening and knew that after doing all the chores in and out the house I would not be keen on cutting up cabbage and beetroot whilst trying to avoid making a mess.

As much as I was interested in having those things, with the salmon I blogged about yesterday, they are the sort of thing that I am reluctant to pay full price for. The beetroot salad is normally 75p but it had been reduced so I managed to grab it for 52p instead and the reduced fat coleslaw came in at 41p instead of the full 59p. With the discounts I felt better about paying for them otherwise I might have forced myself to make them myself. The discounted stickers were a little difficult to remove so please excuse the labels on the following images missing sections.

Before we go into the specifics of each of the products I have to mention the packaging overkill for them both. The tub comes with a lid which is secured down by a label that goes all the way around. You have to go to some effort to rip this label off so you would think the product is pretty secure. But then they also add a layer of plastic under the lid but before the product which is an absolute nightmare to get off. They of course do this to stop the risk of any leaks but I felt like I had endured a full body work out by the time I managed to get the plastic coating off as well. Perhaps it is not usually that difficult and I just had some extra glued down ones but still a bit frustrating.

There were decent chunks of beetroot inside the tub and the flavour of it really came through rather than there being a sense that it had been tamed a little although it did lack that sharp freshness that you often get in beetroot. But there was nothing wow about it and I feel that it could have done with a little seasoning or herbs mixed through it although I do appreciate I bought it in a shop that is not about bells and whistle fancy items in general.

But as well as that I am pretty sure it had been bulked out with some carrot. It certainly had long and thin strands of something in there that had unsurprisingly gone beetroot coloured but the texture left the impression of carrot. Something like that really bugs me because if I wanted a beetroot salad that was only partly beetroot then I would have gone looking for a beetroot and carrot salad. Without scanning the ingredients closely and getting in everybody else’s way in the supermarket there was no indication on the front of the packet or on the shop label to say it had carrot in. Sigh.

The beetroot salad itself

It is certainly one of those things that saves you from having to deal with a beetroot yourself and risking ending up with suspicious coloured hands but I really do not think it was worth even the discounted price. Not because it was bad but just because it did not wow me and lacked that fresh and lively feel that beetroot normally provides me with.

Nutritional details for the beetroot salad

As you know I am trying to eat a little bit better than I have done for a fair while so I made sure that I picked up the reduced fat one. I am sure we all know that because of the amount of mayonnaise pumped into coleslaw that the amount of calories per portion is just a touch mortifying. A 50g portion of this stuff is still 51g and if you are unsure how much 50g of coleslaw is that is about a (not quite fully) heaped tablespoon. And that is one of the reasons I would normally make coleslaw myself because it does not need to be quite so lathered in mayonnaise as it is when pre-packed for shops. 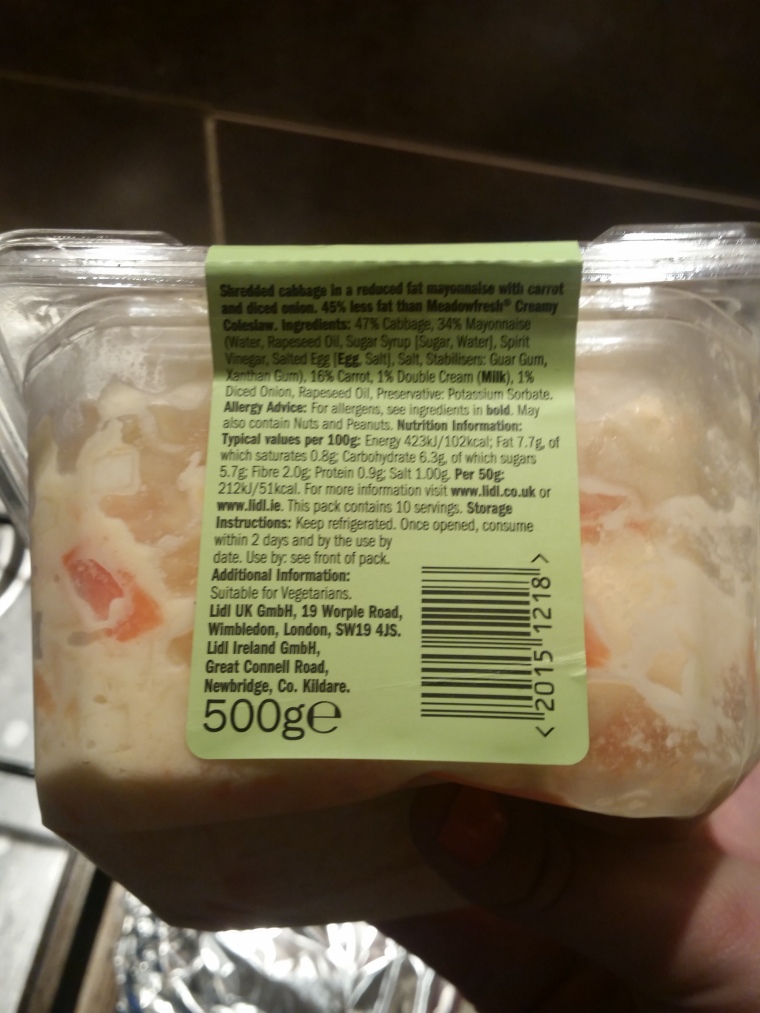 Nutritional stats for the coleslaw

But at least the front of this label is a little more honest and states the three key vegetables in picture form and there were no unexpected surprises hiding within. If you do not happen to know coleslaw is basically just cabbage, generally white cabbage although red can be used,  carrots and onion. 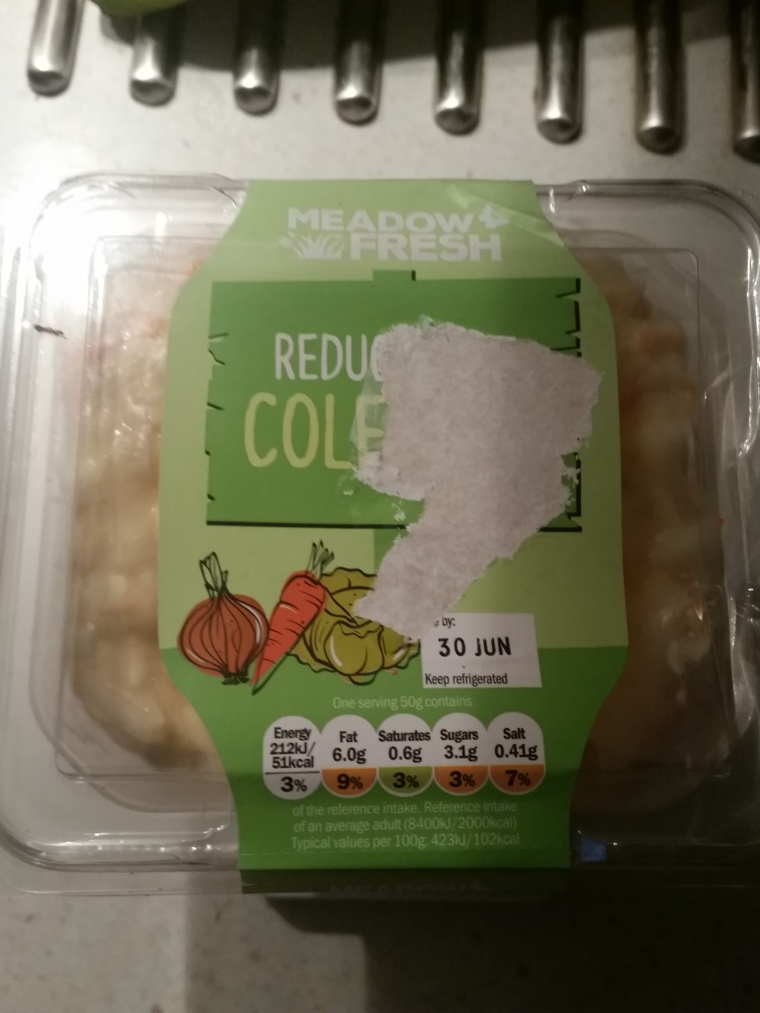 The nusiance but accurate packaging

This stuff was actually fairly decent and the vegetables, if we are calling an onion a vegetable, had a little crunch to them but had soaked in some of the mayonnaise so were not super crunchy. The cabbage too had clearly been allowed to settle as it did not have the fresh bitterness that you tend to get in home-made coleslaw. 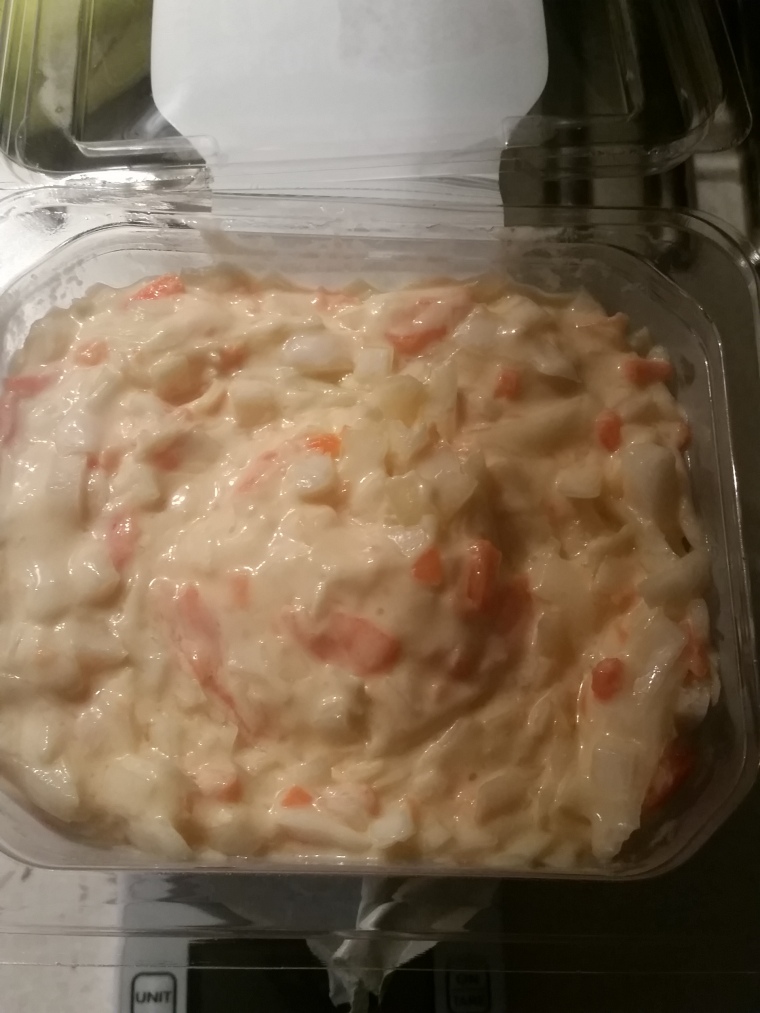 The chunky coleslaw up close

It was nothing out of the ordinary but compared to coleslaws from various brands and shops in the past it was basically up to the same standards. I would feel comfortable recommending this to somebody that wanted to avoid making their own.