The full name of these Lighthouse Bay fillets is a bit of a mouthful so please excuse making them sound a little less interesting in the title but “Two salmon fillets with a classic salt and pepper dusting” was hardly a winning catchy title either. 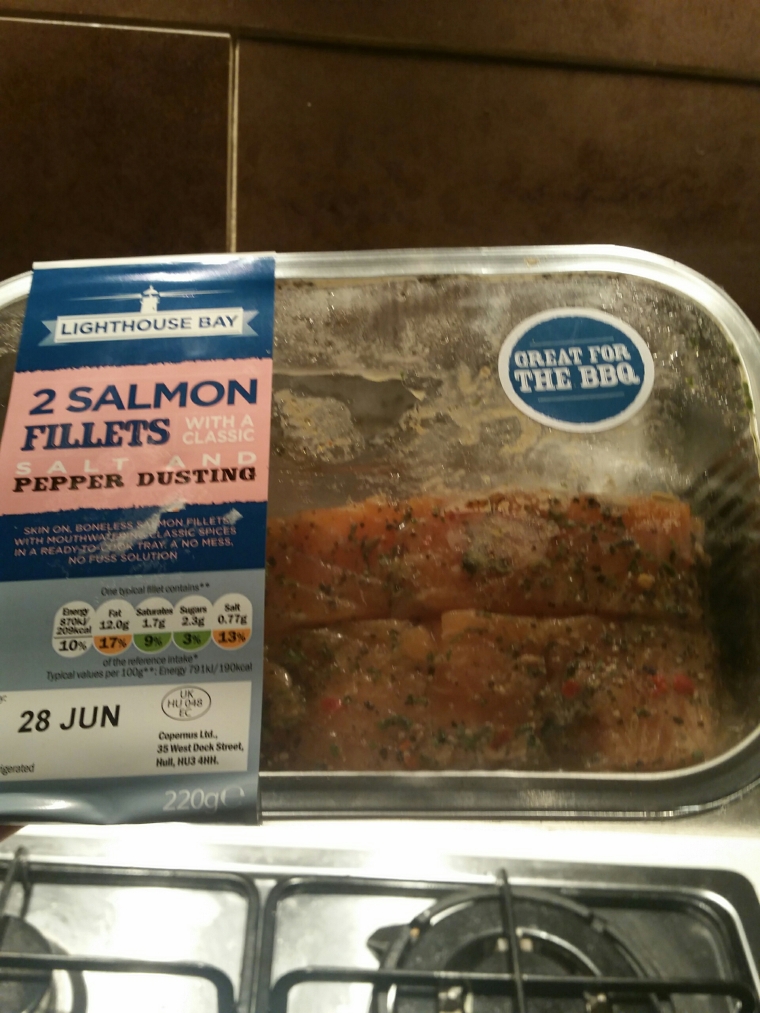 But with a name like that I was a lot more interested in them than I would have been if they were just plain pieces of a salmon. Growing up I was always really unsure of salmon and tended to avoid it and then one day we popped around to a friends house and they suggested we stay for dinner and they did salmon and it was a lightbulb moment for me. It was bloomin’ fantastic! 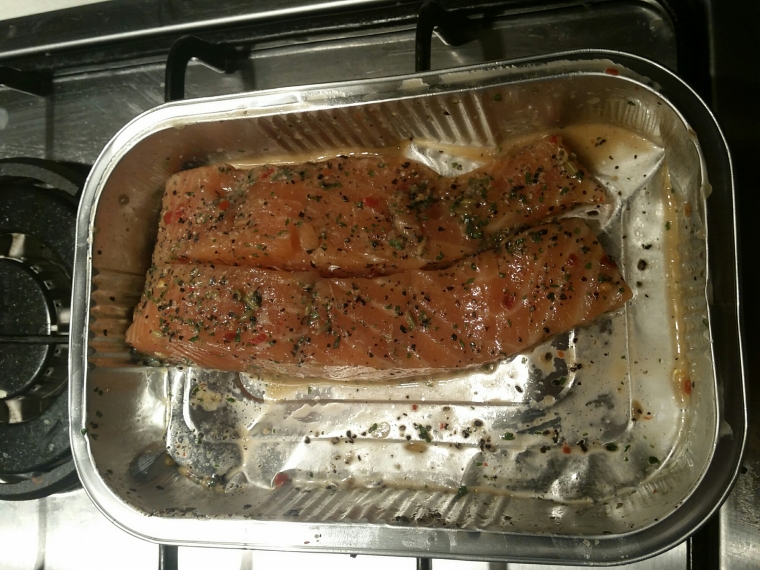 Even though I like salmon now I would still rather go for a plain piece of white fish over a plain piece of salmon so when I seen this salt and pepper dusted stuff on discount I thought I would give it a go. At original full price these pieces would be available in Lidl for £2.79 but I got them for a healthy £1.95 which is still a little more than I would tend to pay for a portion of something but I really fancied them and was clearly feeling a bit flush!

The packet suggested that they would also be good to put onto the BBQ but as the weather has continued to be a traditional British Summer and I was cooking by myself I cannot say that I put this to the test. I can imagine the smoky flavours working well with the seasoning and obviously smoked salmon is normally okay so I imagine it would be good that way. 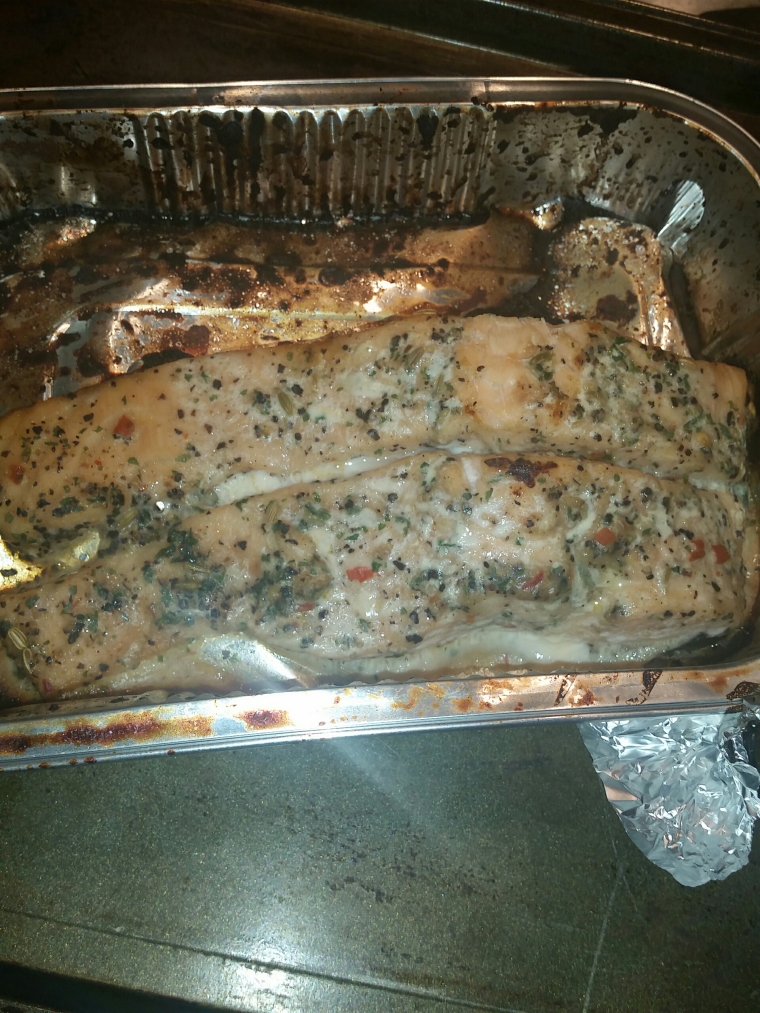 I decided to do my salmon with a few other discounted bits and bobs from Lidl as well as some salad and sweet potato. Just because the summer weather has abandoned us does not mean we are unable to enjoy the summer salads and lighter feeling meals. The combination of it all worked very well together and none of the flavours overwhelmed anything so each mouth could be savoured in taste.

The salmon itself was soft and a very good fillet. The dusting of seasoning was perhaps a little bit off and the bits of dried red chilli that were on it, that had not being mentioned, gave it a little bit of that added heat that I was not expecting but quickly got used to. Whilst the flavours were good and it was a very enjoyable piece of salmon it did have some skin on and this was unable to crisp up because of the way that it was in the tray and the cooking instructions that went with it.

All that had to be done was to take the plastic and label off and cover the foil tray in some foil and then cook for 20 minutes so I did not even turn the salmon over or move it around to realise that there was any skin on it. Because of the skin being at the bottom and therefore soaking in the juices it did not have the ability to crisp up so I stayed well clear of that. Salmon skin is a touchy one for me at the best of times but if it is all soggy then keep it well away from me.

I did also come across the odd bone in each fillet but I literally mean one rather long bone in both pieces. I normally notice bones quite easily so I can pretty safely say that there were not any others hiding away in there that I just missed. But it is something to keep in mind if a bone can stop you in your eating tracks immediately. 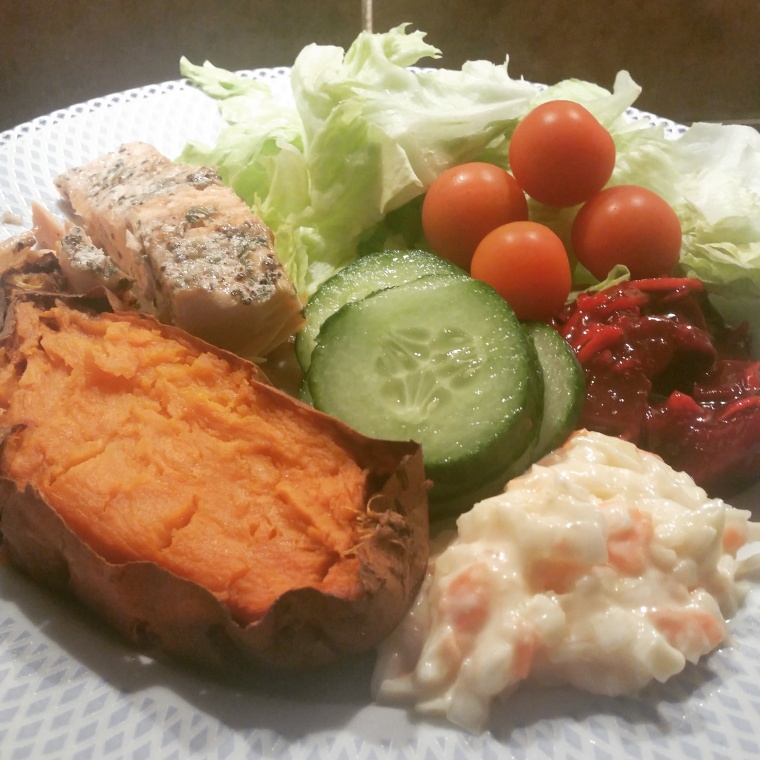 It was a delight to eat though and I enjoyed eating the other piece for lunch the next day. I would say that if you were to purchase this you need to check the packets for ones that are roughly even in size otherwise somebody will end up with a bumper fillet whilst the other person only ends up with a tiny slither.

Great stuff. Would highly recommend, if you fancy some salmon but want to avoid the hassle of seasoning yourself.