What better way to spend the weekend than being a bit silly and letting your partner at your face with some makeup?

I always have Youtube videos on that are tutorials or tags such as X does my makeup and one day he said he wanted to give it a try. With a lack of camera I’ve taken a selection of photos at various stages but apparently when I get a camera (which I really want) nearer the end of the year when finances look up a little we can go through the whole thing again.

Initially he was filled with confidence but that quickly turned to confusion as he looked at everything in front of him and discovered a world of things he had never heard of. I had asked on several occasions if he wanted me to sort stuff out into categories in advance but he decided that it would be more fun to do himself. Walking into the room and seeing this stack of items his facial expression quickly changed. 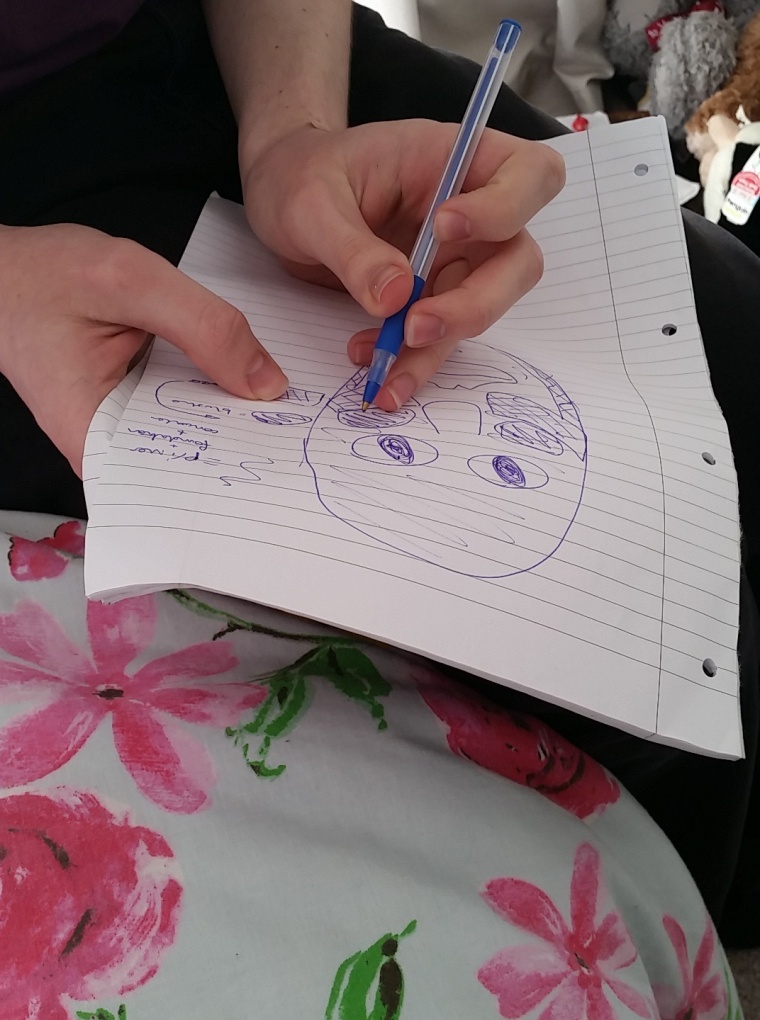 He decided that a plan was what he needed to create in order to plan each step and it seemed to be a logical one but then suddenly the pre-event blaming began with “it’s partly my picture isn’t 100% accurate”. At this point the drawing does not even have any eyebrows so saying it was not 100% accurate seemed a massive understatement.

Sorting through the pile of items little comments arose such as “do you do bronzer and blush?”, “what goes up here [forehead] a picture? Should I blush your forehead?”, “browbone, maybe that’s what highlighter is to do with” and “what the hell is a kajal stick? That’s going over with the mascara [that was actually a clear brow gel]”. Slowly my confidence was fading away too and it became increasingly evident of how little attention he actually pays to the videos or to me doing my makeup.

So we were off and who knew where it would end up or whether I would even remotely look human by the end of it.

He did manage to start with the face primer although decided it was to be applied with the palm of his hands and only on my forehead and cheeks. This would of course be enough for some people but I have quite noticable pores on my nose and would have liked them to have been smoothed out a little.

For foundation I had already dampened my makeup sponge but he came so close to putting the Bourjois healthy mix directly onto it. In the end he squirted two full pumps onto the back of the hand and went about putting the sponge into that and then barely touching my face. After a little prompting I kept saying about buffing it in and he finally applied a little pressure to the sponge. I dread to think how much foundation ended up in the sponge.

It is my normal foundation but he applied so much without getting it to go into my face that I became a full on oompa loompa and there was no attempt at blending it down into my neck. But still I was determined not to say anything and just let him carry on in his merry way as he applied bits of concealer and attempted to blend it in with the sponge.

So next came the bronzer and he decided using a rather large bronzing brush would be good to do precise under chin action and contouring. To start with the aim was to use the Bourjois bronzing powder in the shade 51 but it obviously was not going to show up with that much foundation! So instead the number 54 was brought out. As a result I ended up with a rather glittery glow under my chin.

Then it was time for the next thing that could go massively wrong and you guessed it the blush did indeed did hugely wrong. As Makeup Revolution’s Wow came out and got loaded onto a Sleek brush it swiftly hit my cheekbones and was followed by “ow god it’s gone wrong. I need to blend this out. I’m going to bring it back a bit with highlighter”.

So using the same brush, or at least nothing like the right brush, he decided to apply Makeup Revolution’s Pink Lights baked highlighter on my forehead, over the blush, down my nose, on my cupids bow and my chin. Sounds impressive right? Until you remember that Pink Lights is a purple looking highlighter. Just when I thought it could not get much worse I suddenly had a massively purple and shiny forehead. 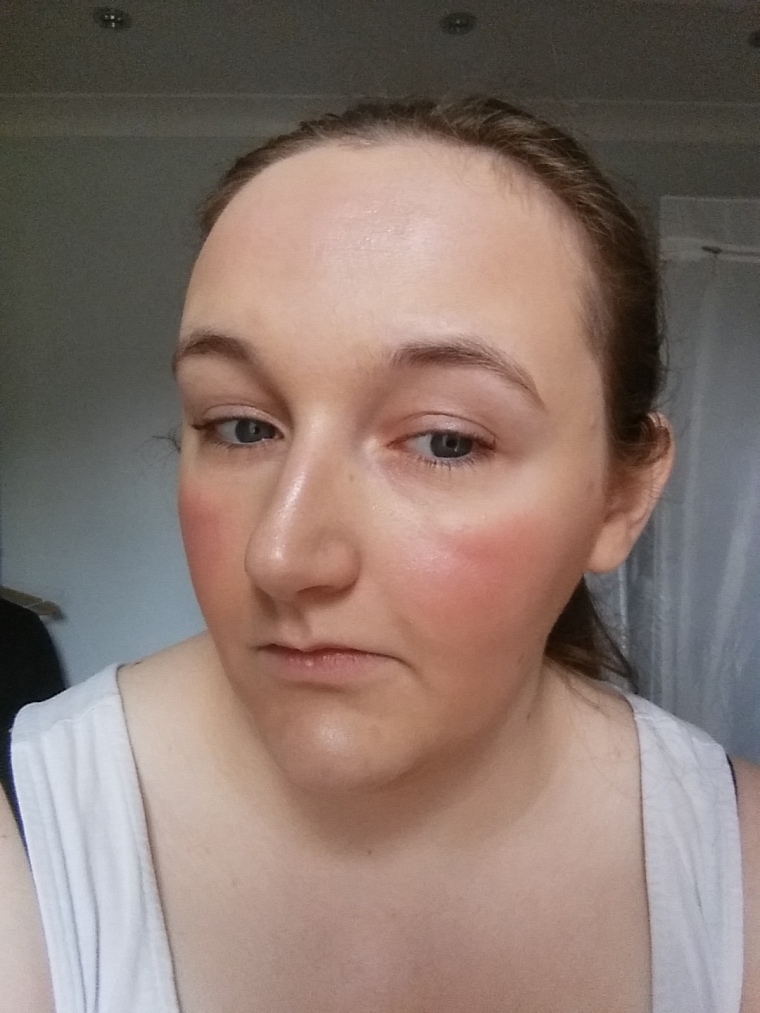 It was clear by now that any faith I had in him for knowing what he was doing was completely misjudged and that there was absolutely no way this could be recovered. But at least it was decided that my face was finished with and it was time to move onto the eyes.

I thought it would not be possible for there to be a mistake made with an eye primer but..

Apparently Makeup Revolution’s focus and fix eye primer goes under the eye as well as on top. After a lot of complaining about the sponge it was finally evened out. For anybody that has never used the eye primer let me point out that it is a little darker than my usual foundation so having it popped under my eye was a disaster. It was obvious what he was thinking but really?

Because of the way that Wet n Wild trios have browbone, crease and eyelid embedded into each pan it was decided that I’m Getting Sunburned would be a good choice. I have three others of the trios that have exactly the same but it was decided these shades were the ones that would look good.

So the browbone shade went on first but as you can see it barely even covers the browbone itself. Maybe though it would get done again at the end or it would all be blended out a bit better. 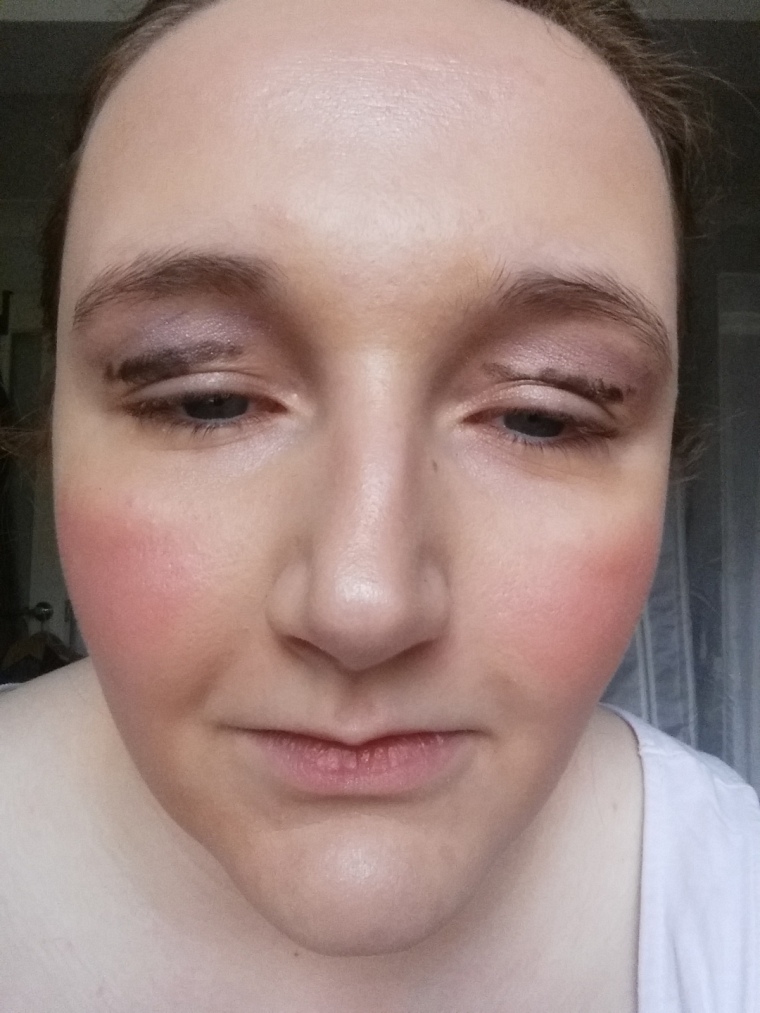 The brush was just thrown into the crease, well sort of the crease, with so much product packed onto it and as a result the immediate swipe was a little too much. Instead of tapping it away or anything though he decided to just carry on going and attempted to blend it out. At this point I was not sure how much was actually on the brush and thought that maybe it would work out okay (why did I still think that it could be alright). 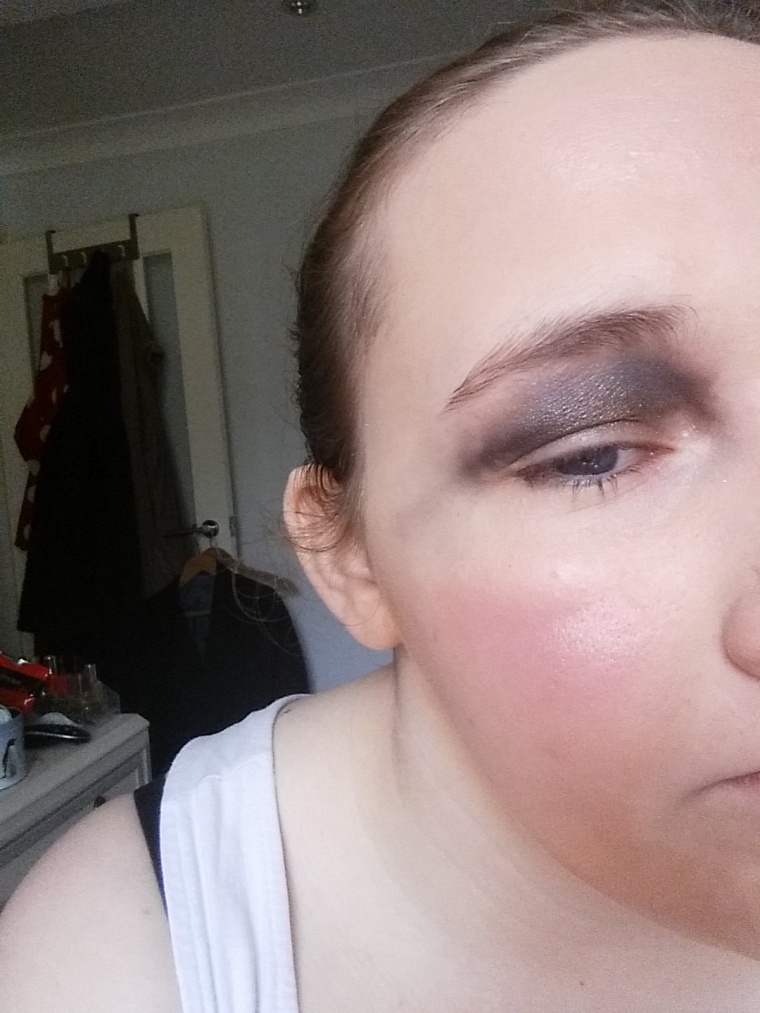 I think a five year old applies makeup to themselves better than this. But there was still the eyelid shiny gold left to go so perhaps it could all be brought together somehow. I mean at this point I had no clue how that would happen but maybe somehow he had a trick up his sleeves that I had never heard of.

Now before the eyes were complete with eyeliner and mascara and before we moved onto lips it was time for the brows. This might have gone better if he could tell the difference between an eye pencil and a brow pencil and as a result I ended up with my brows being heavily loaded with an Avon eyeliner. So my brows became uncontrolable too.

The lashes ended up being a bit of a failure too as he ended up doing the mascara by coating the top of them with my eyes closed and therefore dragged them down and clumped them up rather than lengthening or curling upwards.

So now the eyeliner was to be done. Even though the mascara was already applied. For this it was decided an Avon glimmerstick would do the job. Apparently you do not put eyeliner near to the lashline and instead it just starts from the edge of the eye. And as was joked about earlier in the day I ended up with a hammer and sickle wing (only on one side though).

So finally it was time for the lips and the end was in sight. I knew that it could get a lot worse from here still but especially when it was decided that lipgloss goes before lipliner and that a lipgloss was then applied without checking whether it would work with the lipliner or not. As many people find this is a really difficult task anyway and it ended up everywhere. EVERYWHERE.

So yes I looked absolutely fantastic at the end of it right?? He was actually trying his hardest for the majority of it but there is certainly room for improvement and hopefully he will pay a bit more attention in the future! I was allowed to do his makeup as well though in response and that can be seen on my twitter.

2 thoughts on “Partner does my makeup”