Back on Saturday 17th October I returned to Tooting, London for the first time in far too long. Since moving out of my studio flat back in June 2014 the only times I’ve visited was through required hospital appointments.

Partly I avoided returning because it holds many memories for me and having to leave was a pretty sad day. It felt calm and there was so much greenery near by. Walking in the morning or late at night felt okay and safe. But my partner works in Tooting so he persuaded me to go on a charity shop exploration (there aren’t that many but we still had to..).

I also got to go inside the Superdrug that opened up recently and popped into the TK Maxx but I’ll save the exciting haul details for tomorrow morning’s blog.

We landed in Tooting about 12.30 and by 2pm we both needed some food and the man that is super thrifty and loves charity shops agreed we could have food out. 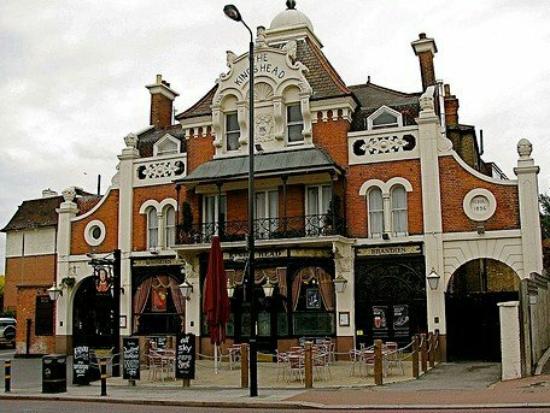 The Kings Head (image taken from here) looks grand with beautiful red brickwork on the outside and sophisticated with a cosy lounge atmosphere inside. We thought there was a risk it would be another over-priced ‘gastro’ pub or another thai restaurant-pub combination but it reckoned up just like any other traditional British pub.

The beer was one specially brewed for the pub and seemed to go down well with my partner (though I hate beer a lot and refuse to even give it a sip to try). The hot chocolate was light, frothy and very creamy so it cooled down quickly and didn’t have that chocolate kick at the end (both of which for me are a shame and I had finished it before food arrived as it was pretty tiny).

The pub was already preparing for halloween with fake cobwebs, blow-up ghosts and dangling spiders dotted around without it being too much. It seems like a place to have a good night out without having to trek into Central London and that the staff care about the punters having a good time. Because of the decor inside the decorations didn’t seem out of place or over the top and it was lovely (even if I don’t get the obsession with halloween).

I haven’t cooked or had the best of diets recently. I’ve struggled to venture outside of the house recently so we have lacked in pretty much anything edible this week as my partner hasn’t had the time. Therefore I should have aimed for the most vegetable filled meal but they didn’t quite grab me. I would normally go for a risotto but they all included soya bean which I am allergic to and few other things had nuts that can set me off too (one type of nut is okay but not three at once).

So I opted for the hunters chicken (chicken, bacon, cheese and bbq sauce) with a side of coleslaw and thick cut chips. The chips were amazing as they were nice and soft on the inside and a little crispy (but not too much) on the outside. Coleslaw is just coleslaw and it’s pretty difficult to get that too wrong. But the hunters chicken was absolutely brilliant as the chicken was so moist, the cheese was noticable but didn’t over power and the inclusion of salty bacon was perfect to counteract the sweetness of the bbq sauce. Even for a sweet-toothed me though I was glad when it was over. Delicious but I was certainly hitting the bbq sauce barrier.

My partner had a beef and ale pie (with the most amazing crimped pastry) with smooth mashrd potato, carrots, green beans and sprouts (a brave decision by the restaurant) with a generous serving of gravy. I tasted a small amount of the pie as he said it was getting rich and very filling and it was divine as the mest melted away in the mouth.

I’ve tried a few places in Tooting and as previous blogs will suggest I struggle to be impressed. But here is one of the better places I have visited and it gets a four and a half from me. A larger hot chocolate would have been good with a bit more liquid but other than that everything was fantastic. The bill came to £25/26 for the food and the drink which given the quality of the food (each dish just shy of £10) is pretty fantastic.

I’d certainly return if given the chance and the finances.