What a better time to visit somewhere new than when people are coming to visit you? There isn’t one. It’s as simple as that!

So for me that meant taking a trip to The Antelope in Tooting, just a short walk from Tooting Broadway station. 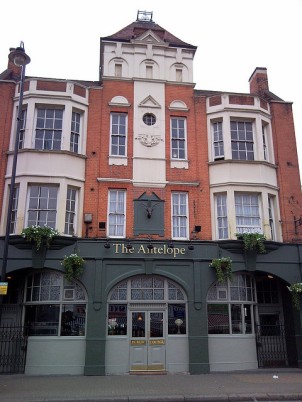 From looking online in advance it seemed impressive, not really like a gastro pub, but somewhere between there and a proper restaurant. The selection of drinks available either on tap or in bottles seemed good too.

And today (16 November 2013) that’s where we went. There menu varies on practically a daily basis, depending on what produce is in season and easily accessible.

I should have taken pictures of my food when it arrived, it really was impressive! So Instead I’ll show you pictures of similar dishes or components of the dishes.

Starter: Padron peppers, Valencia almonds and sea salt. When they arrive they’re in a bowl and there really is rather a lot of them, though they were certainly tasty and very enjoyable. I was keen to pass them around the table a little near the end though, there’s only so many peppers one person can eat as a starter!

Other peoples starters included an artichoke soup and a sharing platter or meats and bread. They all looked equally appealing and seemed to be tasty from what I could tell.

Main: I went for the vegetable and halloumi brioche bun burger, that came with coleslaw and chips. It wasn’t exactly what I was exactly how I expected it to be when it turned up. I was expecting one big big of halloumi at the bottom with vegetables on top. Instead the vegetables and salad were at the bottom with chunks of halloumi on top. But it was still really really tasty, and pretty filling. The comment from the waiter was he was pleased to see the ladies ordering the burgers for a change.

Other mains that were had included a tortellini dish, a squid based dish and a ‘bloody Mary’ burger. The overall consensus was that the squid dish was very light and not overly filling, while the tortellini was largely filling because of it being pasta and the burgers were very filling. You could tell that the bloody Mary burger was homemade with meat from how it look.

Dessert: Everybody is a sucker for dessert right? Well, I am anyway! I had a fruity Eton Mess (pronounced by the person serving us with a proper South London accent). When it arrived it looked delightful, full of fruits that were more wintery than the traditional strawberry, with just the right balance of everything. The meringue in it was just as the right level of crisp too, but still with a slightly soft inside.

Other desserts had included an apple tart with almond ice cream and a very large impressive cheese and biscuit platter.

My boyfriend took the opportunity to try three different ales that they had on offer. He seemed to enjoy trying them all and I don’t think he had any that he wasn’t particularly keen on!

The atmosphere in the restaurant section seemed very friendly and staff were attentive. The was something happening in the room next door, it was packed, I think it was the rugby, but there noise very rarely affected the discussion at the table.

The pub itself had a really lovely layout and a good decor, it seemed like a good place to go to relax and meet up with friends or to go along with a family (including young children and pets) and have a catch up.

I’d truly recommend going here if you get the chance, whether it be for a pint or a bite to eat. Very enjoyable, will go again some time.